In 1809, the same year that Charles Darwin was born and Captain William Bligh was Govenor of NSW, a young English girl called Mary Anne Brailsford planted some apple pips in a pot. For almost fifty years, one of those apple seedlings flourished in the family’s garden at Southwell near Nottingham in Britain.

By about 1856, the garden was owned by a local butcher named Mr Matthew Bramley. The son of a local nurseryman, Henry Merryweather saw potential in the prolific apple tree and was given grafting wood by Mr Bramley. 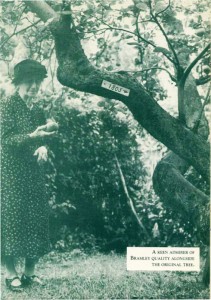 Grafted trees of the new ‘Bramley’s Seedling’ (often abbreviated to Bramley) were first sold in 1862. Remarkably, the original tree grown by Mary remains growing today in the same garden in Nottingham.

In the following 40 years, ‘Bramley’s Seedling’ became a common commercial orchard apple and remains today an important fruit variety in the British apple industry. It is still available in British supermarkets and demand continues for its cooking qualities.

The Bramley is a very acidic apple and hence its culinary qualities. When cooked, it makes a great apple sauce or baked apple. Additional qualities of this late-season apple include its ability to store well and retention of its flavour over a long time.

In the UK, the current annual production of this iconic British fruit is 80,000 to 100,000 tonnes. The annual harvest is sold as fresh fruit, used for commercial processing for various products including pies and crumbles, juice and cider.

1809 – The first Bramley tree grew from pips planted by a young girl, Mary Ann Brailsford, in her garden in Southwell, Nottinghamshire, England.

1846 – A local butcher, Matthew Bramley, bought the cottage and garden.

1856 – It was while Matthew Bramley lived in the cottage that a local nurseryman, Henry Merryweather, asked if he could take cuttings from the tree and start to sell the apple. Bramley agreed, but insisted the apple should bear his name – hence ‘Bramley’s Seedling’.

1862 – The first recorded sale of the variety is in Henry Merryweather’s book of accounts on 31 October 1862. He sold “three Bramley apples for 2/- to Mr Geo Cooper of Upton Hall”.

1876 – Fruits of the grafted apple were first exhibited before the Royal Horticultural Society’s Fruit Committee on 6 December 1876. They were highly commended. 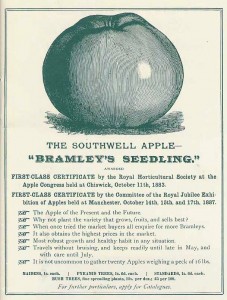 1883 – Bramley Seedlings received a First Class Certificate by the Committee of the Royal Jubilee Exhibition of Apples held in Manchester in October.

1900 – Disaster struck when the original Bramley tree blew down during violent storms at the turn of the century. However, the tree somehow survived and is still bearing fruit more than 100 years later.

1914 – During the early 1900s the Bramley trees were extensively planted, with the fruit a useful source of food during the First World War.

1944 –The 1944 fruit census comprised more than one third of six and a quarter million Bramley’s Seedling trees in commercial plantations in England and Wales.

1989 – Bramley growers themselves are working closely together to expand their market opportunities and, through the Bramley Campaign, which was set up in 1989, are running successful consumer campaigns funded by voluntary subscription.

2003 –The Bramley tree was one of fifty great British trees chosen by the Tree Council’s country-wide network of tree wardens, as a special way to mark the Golden Jubilee and to celebrate fifty great years – one for every year of the Queen’s reign.

Today –The old nickname for the Bramley was “The King of Covent Garden” and still exists today in the New Covent Garden Market, where all specialist fruit wholesales can offer Bramleys to their customers for 12 months of the year.

The original Bramley apple tree continues to bear fruit to this day. Those few pips planted by a little girl in her garden in Nottinghamshire 200 years ago are responsible for what is today a £50 million industry, with commercial growers across Kent, East Anglia and the West Midlands.