Go straight to the pollination guide you require: 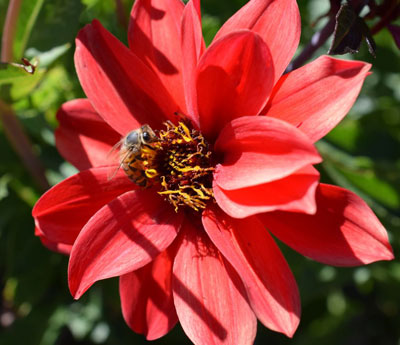 Why do we have to worry about pollination when choosing trees?

Pollination is the process that allows sexual propagation to take place in plants. The reason it is important in growing fruit trees is that fruit will not form properly or at all unless seed is produced and seed will usually not form unless pollination takes place.

Sexual propagation gives rise to new plants which are not identical to a parent plant. It occurs when pollen from the anther (male part) of one flower is transferred to the stigma (female part) of another flower by one of a range of techniques or agents. One of the most common groups of pollinators are bees. These are commonly European Honey Bee (Apis mellifera), but may be locally native bees or in many countries, Bumble Bees. Other pollinators include wasps, moths and ants.

In many fruit tree cultivars cross-pollination is not necessary, however pollination is always improved by having plenty of bees active at flowering. Healthy bee populations are promoted by having multiple varieties of plants flowering at any one time.

Apart from the self-pollinating almond, almonds need to be cross-pollinated with a compatible variety. Compatible pollinators fall into two groups. Choose at least two varieties from either group.

Nearly all apple varieties require a pollinator, that is another apple variety nearby to donate pollen.

It is usually possible to get by without a pollinator in established suburban areas and towns because other apples and/or crabapples will be growing close by, say within a half to 1 kilometre. If you do require pollination partners choose trees with the same or adjacent pollination group number to promote better cross pollination. The PG number, where known, is listed on each variety in our product list. There are five pollination groups, i.e. PG1 to PG5. To find all available apples in the same pollination group enter PG3, or PG4, etc., in the search box at the top right of each page.

Triploid varieties are an exception – they need a pollinator, but will not provide viable pollen for another variety. Therefore best to include two other varieties when planting a triploid to ensure all three can set fruit.

Some varieties self-pollinate, but perform better with a pollination partner.

Note that the pollination group number, i.e. PG# is only used for apple varieties.

They do flower quite early and can consequently be affected by frosts resulting in poor pollination.

Conversely, it is not uncommon for apricots to carry very large crops when weather conditions have been favourable and bee activity has been strong at flowering time. In this case fruit should be thinned as soon as possible after it has formed to ensure an even crop of good sized fruit and to avoid the chance that excess weight will cause branches to break.

According to the NSW Department of Primary Industries Blueberries benefit from insect pollination with increases in fruit set being reported in overseas research. Inter-planting varieties capable of cross pollinating one another has also increased fruit set and size over single variety plantings. Insect pollinated fruit has been found to mature 4–12 days earlier and to be up to 50% larger, depending on the variety. Fruit size has been found to be directly related to seed numbers with seed counts ranging between 3 and 75 per fruit.

Stella is a good universal pollinator being compatible with most of the varieties that require cross-pollination.

Apart from the self-fertile varieties, two different cherries are required for pollination although flowering of both trees must coincide. Flowering times can vary with location and weather variations from year to year.

Chestnuts require two trees, not necessarily of different varieties, for pollination although for reliable fruit set a number of trees should be planted ensuring that flowering times overlap. Chestnut trees are wind pollinated.

From Chestnuts Australia:
It is recommended that several different varieties be planted for the purposes of commercial production. Unfortunately, there is no reliable information as to which varieties are the best pollinators for other varieties.

Pollen is transferred from one tree to another by wind. Several growers have introduced bee hives to their groves but have not observed any significant benefit from them.

Where large numbers of trees are planted, a mixture of varieties is recommended eg. two rows of one, then two of another variety. Where large blocks of a single variety have been planted it has been noted the trees in the middle of the block do not produce as well as those on the edges.

Some cultivars will produce greater yields if allowed to cross-pollinate, although many cultivars do not need cross-pollination at all because they are monoecious types, i.e. have both male and female flowers on the  same plant. Some Mulberries can even produce fruit without any pollination. Pollination occurs by wind.

The majority of peaches and nectarines (nectarines are the same species as peaches - Prunus persica) are self-fertile with the exception of the peach J.H. Hale which needs to be cross pollinated by a different peach variety.

Both the number of fruit and the size of fruit is improved with higher bee activity.

More detailed advice should be sought for commercial orchard planning.

The following table lists compatible pollinators for selected pear varieties taken from a number of sources including Apple & Pear Australia Ltd (APAL) - the relevant web page can be viewed HERE.

Persimmon do not need pollination to produce edible fruit. However the presence of seeds, which requires cross pollination, can change the taste and appearance of fruit.

Persimmon are almost always dioecious which means that male and female flowers are borne on separate trees. This means that at least two trees are required for cross pollination.

For more information see our article All About Persimmon.

Most plums require the presence of at least one other variety of plum flowering at the same time to set fruit. Pollination is carried out by insects so bee and other insect activity is necessary during flowering.

Japanese and European plums do not cross pollinate.

There is no local evidence that quinces require pollen from another variety to set crops. Indeed, there are plenty of examples of single trees cropping well without pollinators. However, cropping improves in many deciduous fruit crops where pollination is provided. It is therefore suggested that more than one variety be grown if possible.

Flowers develop on new shoots in spring. The cultivars overlap fairly well in flowering from the earliest to the latest in cool districts. They open after most apple cultivars, with full bloom 4–7 days later than ‘Delicious’ apples.

While a small crop of raspberries will form without the presence of bees at flowering, bee assisted pollination results in more and larger fruit. In addition the presence of more than one variety flowering at the same time will also benefit fruit set.