Codling moth (Cydonia pommonella) are approximately 1cm long, grey-brown with a copper coloured area at each wing tip. There may be a dark horizontal band about one-third the way along the closed wings separating the copper-coloured area from the rest of the wing. 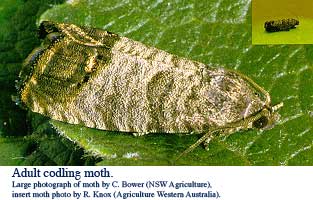 After over-wintering as a fully-grown caterpillar in a cocoon, usually under the bark of a host tree, moths hatch out early to mid-October. Peak emergence is in early to mid-December.

After mating, the first generation female moth lays eggs inside flowers. Later generations lay eggs within a few centimetres of developing fruit. Newly hatched grubs locate fruit and bore in towards the centre to feed on the developing seeds. The grubs then burrow out of the fruit as they (the grubs) near maturity. Telltale signs include lots of frass (reddish-brown droppings). Grubs then pupate for a few weeks when adults moths again hatch out. Later in the season cocoons remain dormant to over-winter.

Codling Moth can complete up to three life-cycles during a single season in Australia depending on location and weather considerations so monitoring of moth numbers should occur from flowering until mid-summer.

Cultural practices, spraying, both conventional toxic chemicals and organically registered softer types, and pheromones can individually or in combinations be used to reduce or defeat this pest. 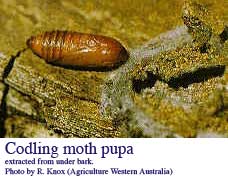 It is important to note that fruit is required for the codling moth to complete its lifecycle. One control method therefore, although drastic, is to remove all fruit in a given year. However, this will not be effective if neighbouring trees continue to bear infested fruit.

Pheremones are used in two ways to assist in the control of Codling Moth.

In commercial situations pheromone sources are placed throughout an orchard to create a large zone where male moths are greatly inhibited from mating because the pheromones prevent them locating females. Females are unlikely to mate successfully and therefore will not produce fertile eggs. This approach is not effective in small orchards or isolated trees as females can easily enter after mating outside the treated tree or area. 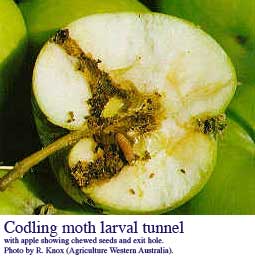 Pheromone lures are used in smaller orchards and isolated trees to assist in assessing moth numbers. Males and/or female attractants bring moths to the traps which include a sticky pad or sheet. Moths become trapped and can then be counted. The decision to spray can then be made based on the build up of moths. When few or no moths are present spraying need not take place therefore avoiding unnecessary expense or damage to beneficial insects. Some control is also provided by the sticky trap itself because it kills those moths which land on it.

Products with the active ingredient Lebaycid are effective, however, this is an organophosphate and its use is not recommended.

The active ingredient in spinosad is derived from a soil dwelling bacterium called Saccharopolyspora spinosa. Spinosad kills susceptible species by affecting the insect’s nervous system. It must be ingested by the insect, therefore it has little effect on sucking insects and non-target predatory insects. Spinosad is relatively fast acting.

To be effective the fresh spray must come into contact with grubs or adult moths, so thorough spraying is required when traps indicate a build up of numbers. While registered for organic use, pyrethrum can still kill non-target species so should be used with care.

Based on a naturally occurring bacterium, Dipel will only control caterpillars before they enter fruit, so it should be used in conjunction with monitoring.