Bordeaux spray can control a number of common orchard fungal and bacterial problems including Peach Leaf Curl, Brown Rot, Downy Mildew, Scab, bacterial leaf spots, cankers and others. It is used in a range of cencentrations on fruit trees, vines, brambles, vegetables and ornamentals. 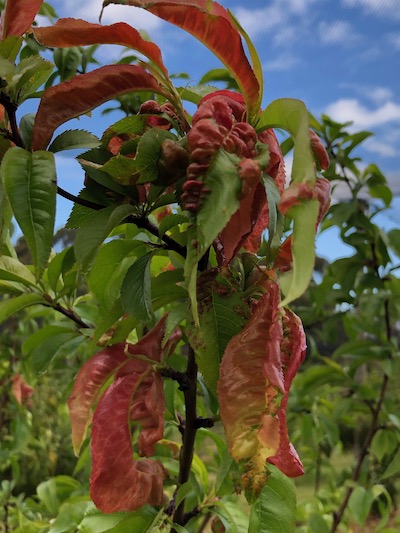 Bordeaux is suitable for all deciduous fruit trees, although it may cause russeting on some apple varieties, and is generally sprayed twice each year, at leaf fall in autumn and again in late winter. While it is quite a safe spray, gloves, face protection and other protective clothing should be worn. It should only be used in lower concentrations after foliage has appeared.

To control peach leaf curl, which primarily affects peaches and nectarines, sometimes other stone fruit, spray twice each year. First spray is at leaf fall and the second spray just before buds start to open, generally from late July to early August. It provides good early season control for brown rot in a variety of fruits and is also useful in controlling rust on raspberries and preventing early fungal attack on roses. Bordeaux works as a preventative, not a curative, so it will be necessary to re-spray following moderate to heavy rain. It generally survives light rain.

One of the great advantages of Bordeaux spray is that it can be inexpensively and safely mixed at home with two easily obtainable ingredients, copper sulphate and slaked lime. Many nurseries sell copper sulphate as bluestone while slaked lime is widely available as Limil.

Quite small quantities of ingredients will make many litres of spray. This is just as well as plants should be thoroughly sprayed to the point of runoff.

The key to successful spraying is straining the resulting mixture through muslin cloth to remove larger solid particles that can block spray nozzles. For best results strain twice. First strain through two thicknesses of muslin cloth when pouring the lime mixture into the copper solution. Rinse the muslin in cold water, fold it over the top of the garden sprayer and pour the complete lime/copper mixture into the sprayer. Remember to continuously stir while preparing and agitate while spraying as the mixture can quickly settle out. It is best used within 24 hours of mixing.

Step by step instructions to mix 20 litres of 1% solution

The discovery of Bordeaux spray, named for the famous French wine region, like many of the most useful scientific discoveries was an accident.

In the latter half of the 19th century it was common practice to deter pilfering of ripening grapes by spraying vines with a mixture of copper and lime. The cloudy residue, which created an unattractive appearance and left an unpleasant taste, was only sprayed on the first few rows of vines nearest the roadside, those within reach of hungry passersby. Following an outbreak of downy mildew in the early 1880s it was discovered that vines sprayed with the copper mixture were largely unaffected by the fungus. Subsequent trials led to Bordeaux spray, as it became known, becoming the world’s first fungicide.

Its low mammalian toxicity and topical mode of action make it a safe spray that is accepted under various organic registration regimes. It is still in wide use today and, in fact, remains a most useful tool for both conventional and organic growers of a wide range of fruit and vegetables.